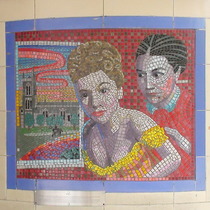 Rebecca, 1940
Joan Fontaine as the new Mrs De Winter struggling to escape the memory of her husband’s first wife, Rebecca. Here, Mrs Danvers (Judith Anderson) wills her to suicide. In the background, St John’s Church, Leytonstone, as it was in Hitchcock’s childhood.

Mrs Danvers (Judith Anderson): “You’re overwrought, madam. I’ve opened a window for you. A little air will do you good. Why don’t you go? Why don’t you leave Manderley? He doesn’t need you. He’s got his memories. He doesn’t love you – he wants to be alone again with her. You’ve nothing to stay for. You’ve got nothing to live for have you, really? Look down there. It’s easy, isn’t it? Why don’t you? Go on, go on. Don’t be afraid...”

This section lists the subjects commemorated on the memorial on this page:
Hitchcock mosaics 09 - Rebecca, 1940

This section lists the other memorials at the same location as the memorial on this page:
Hitchcock mosaics 09 - Rebecca, 1940