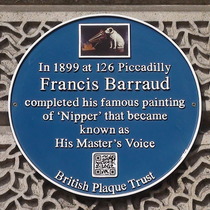 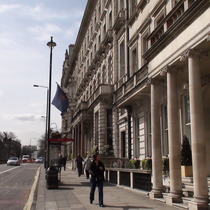 In 1899 at 126 Piccadilly Francis Barraud completed his famous painting of 'Nipper' that became known as His Master's Voice.
British Plaque Trust

The Cavalry Club was formed in April 1890 and began life at 127 Piccadilly. Over the years it expanded into 126 and 125 and refurbished the whole site in 1907-9. The Guards Club, founded in 1810, merged in 1975. All this we learnt at the Cavalry and Guards Club but it doesn't tell us the state of 126 in 1899, the date of the painting: was it already part of the club in which case Barraud presumably set up his easel while staying at the club (seems a bit odd) or was it still a private home, in which case was Barraud living here?

We got the answer, via a roundabout route, at Wikipedia: Francis had two brothers, Mark and Herbert (24 August 1845 - 1896) a photographer with studios at a number of addresses including 126 Piccadilly. He died in November 1896 so perhaps Francis inherited the lease on the Piccadilly address and that would explain his presence there in 1899.

It's interesting that Herbert was a photographer. The painting was created after Nipper's death so we'd assumed it was done from drawings but perhaps Herbert had made a photograph and that was the basis for the painting. Perhaps Francis found the photo while sorting his brother's things. Nipper had belonged to the other brother, Mark, who had died in 1887. It's sad to think of Francis painting the dog belonging to one dead brother in the studio of another, recently dead, brother. Maybe we are over-sentimentalising.

This section lists the subjects commemorated on the memorial on this page:
Francis Barraud & Nipper

Painter.  Born London. Son of Henry, also an artist, and brother to Mark, a t...

This section lists the subjects who helped to create/erect the memorial on this page:
Francis Barraud & Nipper

A charity with: "The key objective of the British Plaque Trust (BPT) is to re...

This plaque is on the right-hand fork of the path close to the Camberwell Gre...