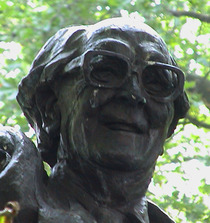 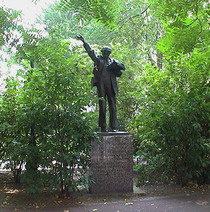 {On front of plinth:}
Fenner Brockway
President of Liberation
Born 1 November 1888
Died 28 April 11 1988
Erected by the GLC in honour of his untiring efforts for peace and racial equality.
25 July 1985

{The base of the statue is inscribed:}
Walters

The statue, by Ian Walters and unveiled (very appropriately) by Michael Foot, MP in 1985, is very characterful, with the hitched up jacket shoulder and clutched pile of books. Brockway was present at the unveiling and we know of only a handful (but see below) of statues in London unveiled while the subject was still alive (as of 2008, at least), the others being:
Viscount Nuffield at Guy's Hospital
Duke of Wellington at the Royal Exchange
William Gladstone in Bow Road
Churchill in Woodford Green
George Peabody at the Royal Exchange
Nelson Mandela on the South Bank
Nelson Mandela in Parliament Square
Queen Aexandra statue
King Charles II
Sir Robert Clayton

Via Facebook Rhona Levene suggested we add to this list the Churchill statue at the Guildhall, unveiled by Churchill himself. As a general rule we only collect exterior memorials but happy to note it here.

April 2017: Londonist added another 15 statues to our list - clearly we’d previously been blind to footballers. Some we have not yet published but they are in the queue. Londonist also refined this game with the concept of statues to people who are still alive. We’ve put an * on those, but note the date of this post – we take no responsibility for what happens hereafter!

2019: Via Facebook Carol Naylor wrote "If monarchs are also being counted there's the statues of Edward VII and Queen Alexandra on the front of the V&A. The statues of Queen Victoria and Edward VII as Prince of Wales on the Temple Bar Memorial. There's also the *original* statue of Pavolova on top of the Victoria Palace theatre. And more footballers - Ray Wilson, Martin Peters and Geoff Hurst in the World Cup group at Upton Park." Too, too many. This roll-call is now at an end and we thank Carol for pointing out the futility of the exercise.

This section lists the subjects commemorated on the memorial on this page:
Fenner Brockway statue

In January 1972, at the time of Bloody Sunday, Hymans is reported as being in...

This section lists the subjects who helped to create/erect the memorial on this page:
Fenner Brockway statue

Politician and journalist. Born Plymouth. Leader of the Labour party 1980-198...