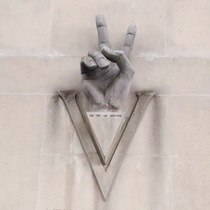 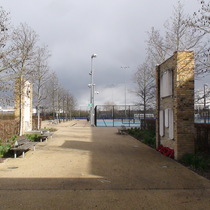 On the flag inside the wreath to the left:}
Eton Manor

On the ribbon below the crowned monogram to the right:}
Queen's Own Oxfordshire Hussars

{On the panel, lower down:}
Eton Manor will always remember with gratitude the youth of this district who served under the dauntless and triumphant leadership of Winston Churchill.

{Outside the central panel:
on the left - a flag inside a wreath
on the right - the insignia of the Queen's Own Oxfordshire Hussars

The lowest element of this memorial ("Eton Manor will always....") projects from the wall and is somewhat reminiscent of a sarcophagus. We believe this to be (part of) the original memorial, while the other elements here are more recent. "this district" refers to Hackney Wick so the text strongly suggests that boys from this club joined the QOOH. But we cannot find any confirmation of a connection between the QOOH and the club. Without that we are left wondering why this memorial is here, rather than somewhere else, such as, well, Oxfordshire.

The quote is from a speech delivered by Winston Churchill to the House of Commons 4 June 1940. A Churchill quote would have been considered particularly appropriate given the strong connection between the Hussars and the Churchill family.

This section lists the subjects commemorated on the memorial on this page:
Eton Manor - Queen's Own Oxfordshire Hussars and Churchill

The private boys school Eton College launched a scheme to provide social and ...

This section lists the subjects who helped to create/erect the memorial on this page:
Eton Manor - Queen's Own Oxfordshire Hussars and Churchill

The youth of the Hackney Wick district who served under the leadership of Win...

This section lists the other memorials at the same location as the memorial on this page:
Eton Manor - Queen's Own Oxfordshire Hussars and Churchill

Roll of Honour has a photo of the parish WW1 memorial that used to be inside ...