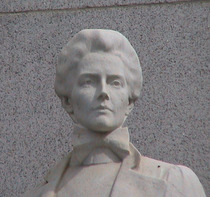 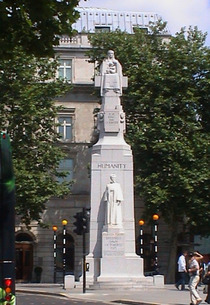 {Beneath the statue of Cavell:}
Edith Cavell, Brussels, dawn, October 12th 1915.
Patriotism is not enough. I must have no hatred or bitterness for anyone.

{Near the top, at the front:}
For King and Country.

{Level with that, on the back:}
Faithful until death.

{Above the statue of Cavell:}
Humanity

{Level with 'Humanity', on the left hand side, back and right hand side:}
Devotion
Fortitude
Sacrifice

This was the obvious memorial to choose as the first featured memorial for London Remembers, in February 2004. Cavell was executed by the Germans in Brussels and she figures on our other site, Brussels Remembers. She was a British nurse, executed for helping allied soldiers escape.

Click on the button at the left: "subjects commemorated" to gather more details of her heroic live and death.

We thank Jamie Davis for finding this link to the British Pathe news film of the unveiling and for sending a news-clipping which says that prior to the arrival of this statue this island was occupied by a statue of General Gordon, which was removed to Khartoum.

Osbert Sitwell did not like this memorial. In his 1928 People's Album of London Statues, he writes that it: "with its absurd babies and all its apocryphal tackle of quite meaningless and sentimental allegory, further vitiated by a mistaken effort at German modernity, is an eyesore and atrocity of the most infamous kind."

A wreath is laid here every year on 12 October, the day she was executed.

This section lists the subjects commemorated on the memorial on this page:
Edith Cavell statue

This section lists the subjects who helped to create/erect the memorial on this page:
Edith Cavell statue

The lower section of the cross is inscribed with a list of 18 names. There is...