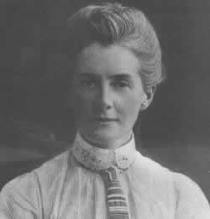 Credit for this entry to:
Jane Davis

Edith Cavell was born on 4 December 1865 in Swardeston in Norfolk. At the age of 20 she entered the nursing profession, training at the London Hospital 1896 - 1901. Assistant Matron at the Shoreditch Infirmary, 1903 - 1906. In 1907 she became the matron of the Berkendael Institute in Brussels. During the First World War the Germans occupied Belgium, and Cavell sheltered British, French and Belgian soldiers at the Institute, from where they were helped to escape to Holland, which was neutral. In August 1915, Cavell and several others were arrested and tried by a court-martial. Cavell made a full confession and was sentenced to death on 7 October.
Although neutral governments, including the US and Spanish representatives tried to have them reprieved, she and a Belgian, Philippe Baucq, were shot on 12 October. Her death was widely condemned. She is buried at Norwich Cathedral. There are three memorials to her in Brussels.