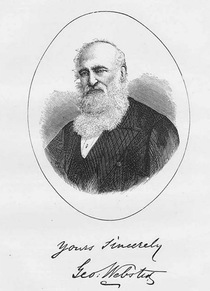 From Genealogy we learn: He graduated as a surgeon at the age of about 18 possible from Glasgow University. Father of Dr Marshall Hall Webster. The fountain was erected in the middle of the main crossroads but was later moved - though we can't find confirmation or any more details of this.

This section lists the memorials where the subject on this page is commemorated:
Dr George Webster

{On the north face of the main body, above the water bowl:} To George Webster...