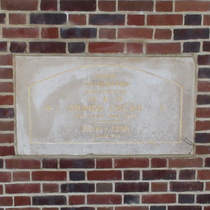 {Translates as:}
This foundation stone was laid by Prince Oscar on 26 July 1871.

This is the foundation stone from the Norwegian church that preceded St Olavs, at another site.

This section lists the subjects commemorated on the memorial on this page:
Ebenezer Church - Prince Oscar

From Exploring Southwark: "The Norwegian Mission Society opened a mission in ...

This section lists the subjects who helped to create/erect the memorial on this page:
Ebenezer Church - Prince Oscar

Born in Stockholm to the crown prince of Sweden and Norway. Became king Oscar...

This section lists the other memorials at the same location as the memorial on this page:
Ebenezer Church - Prince Oscar