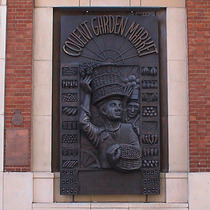 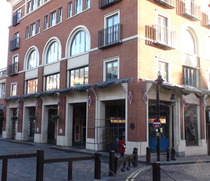 {The main text, below the central figure reads:}
In May 1670, King Charles II issued a grant to the 4th Earl of Bedford, to hold a market in Covent Garden's Piazza 'on every day of the year except Sundays and Christmas Day, for buying and selling all manner of fruit, flowers, roots and herbs'. For the following three centuries, London's largest fruit and vegetable market traded here. In 1828, the 6th Duke obtained Parliamentary powers to provide market buildings, which were then roofed in 1876. The estate remained in the Bedford family until 1918. This bronze honours all those men and women who bought and sold fresh produce here which was then distributed throughout England.
{At each side of the central figure are boxes of various produce (carrots, coffee beans, potatoes, etc. Between these boxes are the names of 22 traders, given in the list of Subjects Commemorated:}

{To the left of the relief there are two, visually quite dull, plaques. The lower one reads:}
The Worshipful Company of Fruiterers, in celebration of the Company's 400th Anniversary, 1606 - 2006, W. A. Sibley Esq - Master, Lt. Col. L. G. French - Clerk. This bronze relief sculpture was commissioned on the initiative of Sheila and Barry Springer, supported by The Covent Garden Area Trust, The Woburn Trust and The Jubilee Market Traders. It commemorates the bustling fruit and vegetable market that operated in Covent Garden from 1670 to 1974. With grateful thanks to those named on the relief and to the many others who donated so generously. Also to the following livery men of the Worshipful Company of Fruiterers and their forebears, who worked in the market:
D. L. Cooper
P. D. Cooper
A. Glass
A. J. Goldsmid
A Harris
L. S. Olins, JP
J. E. A. Olney
I. A. Rainford
National Federation of Fruit and Potato Trades, New Covent Garden Market Authority, Covent Garden Area Trust.
Sculptor - Glynis Jones Owen, October 2006.

{The plaque above this depicts a goat, under an elaborate crown and below, the motto, all, we understand, relating to the Duke of Bedford.}
que sera sera

Large bronze relief "Fruit Porter Bronze", unveiled October 2006 by Mayor of Westminster. Commissioned by Worshipful Company of Fruiterers, with contributions from many of the market traders.

In our picture the Jubilee Market Traders plaque can be seen on the back wall of the arcade.  In front of it, the Queen's stone plaque is to the left and to the right is one that dully reads "Speyhawk Land & Estates Ltd, 1987.  Contractors: Tellings Ltd.  Architects: C.G.H.P. Architects".  The Donkey plaque is being admired by the red-coated lady.

Bonus fact: Before the Dissolution of the Monasteries in 1540 the Covent Garden area was the Convent Garden associated with Westminster Abbey.  Somewhere along the line the "n" was lost.

This section lists the subjects commemorated on the memorial on this page:
Covent Garden Market

This section lists the subjects who helped to create/erect the memorial on this page:
Covent Garden Market

This section lists the other memorials at the same location as the memorial on this page:
Covent Garden Market

The Jubilee Market traders have laid this stone to commemorate the creation o...

Similar to those "spot the ball" competitions, in that no ball is shown. 202...