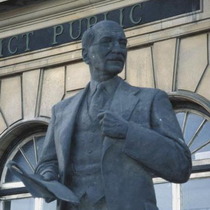 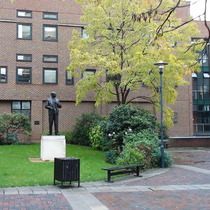 In 1945 Attlee was at the election count in the Great Hall of the People's Palace, now part of Queen Mary, when he learned that his party had won sufficient seats in parliament to form the first post-war government.

Unveiled by Lord Wilson of Rievaulx in 1988, this statue was originally located in Limehouse. It was supported by the GLC and Tower Hamlets Council and sponsored by Dan and Lily Frankel. The relocation and repair in 2010 was funded by Queen Mary and facilitated by the Council from which it is now on long term loan.

The statue was created by artist Frank Forster and unveiled by Lord Mandelson in its new location on 4th April 2011.

It's rather disconcerting that the plaque refers to "Queen Mary College" as "Queen Mary" as in "... the Great Hall....now part of Queen Mary, ...".

Foolishly we forgot to take a close-up picture of the statue so we have used a picture of it from VADS, in its original location.

This statue was commissioned by the GLC but had to be given to Tower Hamlets Council in 1986 when the GLC ceased to exist. It was originally unveiled in 1988 in Attlee's constituency outside the Limehouse Library in Commercial Road. In 2003 Tower Hamlets closed the library and two years later the statue was vandalised (one of the hands was broken off and stolen) so it was boxed for security, until 2010 when the decision was taken to move it to this current site, under the protection of QMC. The sculptor of the statue, Forster, carried out the restoration and it was unveiled on a new Portland stone plinth in 2011.

This section lists the subjects commemorated on the memorial on this page:
Clement Attlee statue

This section lists the subjects who helped to create/erect the memorial on this page:
Clement Attlee statue

We think the picture we have found is the right man but we're not certain. F...

This section lists the other memorials at the same location as the memorial on this page:
Clement Attlee statue

A 1908 article in the New York Times nicely describes the king as being in "i...

Marble and said to be 12-foot high but that must be including the pedastal, s...