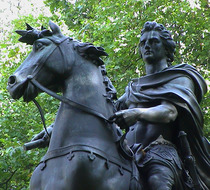 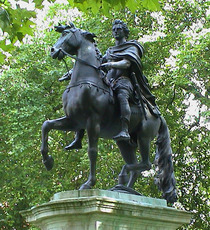 {On either side of the plinth is written:}
GVLIELMVS.III

This statue shows King Billy's horse about to trip over a mole-hill and throw the monarch to his eventual death.
The modern information board at the entrance to the gardens states: "The statue of King William III, which now graces the centre of the Gardens, was first suggested in 1697, but it was not erected until 1808, and was executed in bronze by John Bacon."
Elsewhere we learn that it was designed by John Bacon and completed, after his death, by his son, John Bacon the Younger.

This section lists the subjects commemorated on the memorial on this page:
William III statue - SW1

This section lists the subjects who helped to create/erect the memorial on this page:
William III statue - SW1

Awarded the first gold medal for sculpture by the Royal Academy in 1769. Othe...

Son of John Bacon the elder. He trained as a sculptor and carried on his fath...