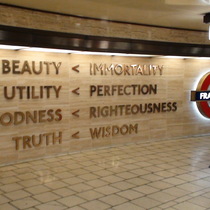 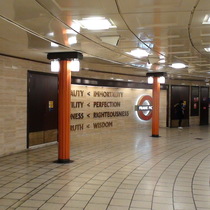 {Plaque on the alcove return at the left:}

As the visionary Managing Director of London Underground in the 1920s and Vice Chairman of the newly created London Transport from 1933 - 40, Frank Pick was instrumental in establishing the most progressive and modern public transport system in the world.

Frank Pick planned the expansion of the bus and underground network and commissioned the leading architects, artists and designers of the time to shape every aspect of the passenger experience. “London Transport”, he said, “is or will be a work of art”. From the classic station designs by Charles Holden, to the range of memorable travel posters, from the adoption of the famous Roundel, one of London’s most recognisable symbols, to the introduction of Harry Beck’s iconic map, and the commissioning of Edward Johnston’s type-face still in use today, everything was considered by Pick.

Frank Pick’s own words above, taken by Langlands & Bell from his lecture notes in the Transport for London archive, demonstrate his conviction that good design contributes decisively to the quality of city life.

Unveiled 7 November 2016 to mark the 75th anniversary of Pick’s death and the centenary of the Johnston typeface.

This wall space was previously occupied by a bank of pay phones.

This section lists the subjects commemorated on the memorial on this page:
Frank Pick at Piccadilly Circus

Calligrapher and lettering designer. Born in San José, Uruguay, the son of an...

Pioneer of good design for London Transport. Born Lincolnshire. Click on the ...

This section lists the subjects who helped to create/erect the memorial on this page:
Frank Pick at Piccadilly Circus