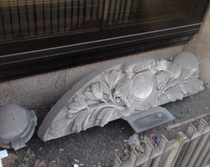 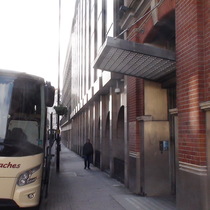 This window pediment was taken in 1979 from the former building on this site. It is retained in commemoration of Richard Courtney Balding under whose Chairmanship this building was commissioned.

The pediment is at about ground level, between the window and the pavement railings. And yes, we had to clean the metal plate before we could read the inscription.

Pediments are classical decorative architectural features which can often be found above doors or windows. They are often  shallow triangles but can also be shallow segments of circles, as here.

The plaque does not mention the pair of architectural bosses but they presumable came off the same building.

2020: We had failed to find an image of the building but then Ian Visits investigated and found a letterhead for the company using a drawing of the building. In that drawing you can see, at first floor level, on either side, there are shallow segmental pediments. Perhaps you can find the bosses on this frontage, but we can't.

This is a horrible section of pavement - lined with coaches, many with their engines running, uggh, but we are glad we walked it because, in the first arched bay of the marble-clad building, we found this rather sorry memorial.

Balding's father (and we think Balding himself) was a senior manager in the United Friendly Insurance Company. Our researches suggest that UF's offices were at 38-42 Southwark Bridge Road from at least the 1960s until 1997 when they moved to Cheshire. We'd date the current, grim, post-modern office building to the 1980s which tallies with the date on the inscription. So the pediment must belong to the UF offices that were here before.

2016: the building is occupied by Sungard Availability Services - it's anyone's guess what they do.

This section lists the subjects commemorated on the memorial on this page:
Richard Courtney Balding

38-42 Southwark Bridge Road was used by, probably built by, United Friendly I...

Our researches have turned up just one clue, which may mean nothing: in John ...

From Royal Parks: "The gates were designed by Charles Crookes. Each of the ca...

The inscription is on a window and consequently is very difficult to photograph.