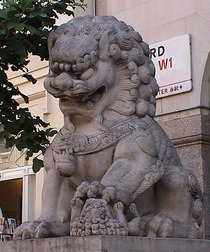 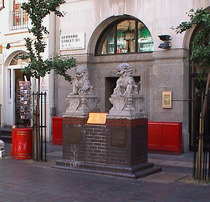 {On the plaques attached to the brickwork, the right-hand one being in English:}
This plaque is presented with much pleasure by China Travel Services (H.K.) Ltd to commemorate the unveiling of two Chinese Lions by HRH the Duke of Gloucester on the 29 October 1985 (during the quatercentenary year of the City of Westminster) at the formal opening of Gerrard Street China Town. The unveiling ceremony was attended by His Excellency Hu Ding Yi the Ambassador of The People's Republic of China, the Right Worshipful the Lord Mayor of Westminster Councillor Roger Bramble, Mr Colvyn Haye, CBE, the Hong Kong Commissioner and Mr Harry Chi-Cheung Lee President of the China Town Chinese Association (London).

{On the plaque between the lions, lots of Chinese characters which we are incapable of transcribing or translating and, luckily, some English:}
This plaque was unveiled on 7th February 2000 by HRH the Prince of Wales on the occasion of the Royal Visit to London Chinatown to celebrate the Chinese Lunar New Year of the Dragon Millennium 2000.

This section lists the subjects commemorated on the memorial on this page:
Chinese lions

This section lists the subjects who helped to create/erect the memorial on this page:
Chinese lions