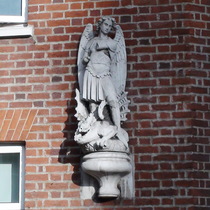 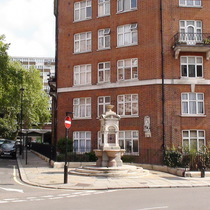 When you have a winged character overpowering a dragon - who is it - St Michael or St George?

Here we have St Michael. Our confidence comes from the existence of St Michael's (National) School on this site. As happens quite often, we think that when the school was demolished to make way for this rather dull 50s (?) block they rescued this piece of sculpture and placed it here in memory of the school.

Two thirds of this block, the northern part, used to be occupied by St Michael's (National) School - see 1891 map. This map shows a detached property at the centre of the southern part of the site, surrounded by, presumably, gardens. Another 1901 map shows the same arrangement. Both maps show the fountain on the corner. It's likely that the detached property had been subsumed into the school by the time the whole block was redeveloped.

Trying to find an image of the school (and failing) we kept finding it described as "St Michael's Chester Square". Certainly the church, St Michael's, is in nearby Chester Square (to the north). We can only think that the school was named after the church, including the address. Perhaps it started in a small building in Chester Square and kept the name when it moved to this much larger site. Either way it confused us and probably confused lots of people at the time.

We found a presentation book on eBay which confirms that "St Michael's School, Chester Square, London SW1" still existed in 1953.

2022: IanVisits says that the detached property was the St Michael's vicarage, last occupant Rev. James Fleming. That seems extremely likely, but we still can't find an image of it.

The 1954 film 'Cocktails in the Kitchen' has Dirk Bogarde and wife living in a one-room flat in the Cundy Street flats near here and, at about 30 mins in, the camera pans past this junction showing this fountain and the statue exactly as they now are.

This section lists the subjects commemorated on the memorial on this page:
St Michael's School, Chester Square - statue

This section lists the other memorials at the same location as the memorial on this page:
St Michael's School, Chester Square - statue

{On the small plaque on the wall to the left:}For Anna Kendall, headteacher o...