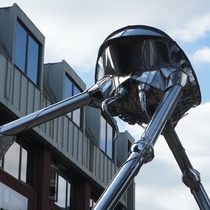 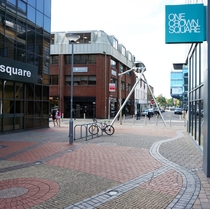 {On a plaque at the base of the sculpture:}
The Woking Martian by Michael Condron 1998
This sculpture is the artist's interpretation of a "walking engine of great glittering metal".
It celebrates Woking as the birthplace of modern science-fiction and marks the centenary of H. G. Wells first edition of 'The War of the Worlds'.
In this pioneering novel humanity is saved from an overwhelming Martian invasion by earth's smallest creatures, bacteria.
This sculpture was unveiled by the Mayor of Woking , Cllr Mrs Irene K. Mathews, April 1998.

Around the sculpture are several pavement slabs representing the bacteria, which were the downfall of the Martians.

This section lists the subjects commemorated on the memorial on this page:
The Woking Martian

This section lists the subjects who helped to create/erect the memorial on this page:
The Woking Martian

This section lists the other memorials at the same location as the memorial on this page:
The Woking Martian

The web address no longer has Wells' material on it, but the Guardian reporte...