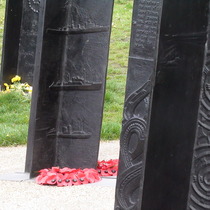 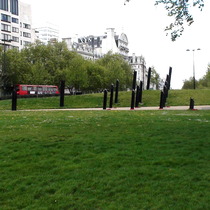 {On the standard to the inside of the path:}
This memorial commemorates the enduring bonds between New Zealand and the United Kingdom, and our shared sacrifice during times of war. It is a symbol both of our common heritage, and of New Zealand's distinct national identity.

16 bronze standards, each decorated with texts and motifs of New Zealand, such as a fern leaf, a manaia figure, a farmer, Anzac poppies, a rugby ball. The cross-section of each standard is that of a crucifix. The front ten form an angled grid with a ‘leader’, the one with the text transcribed here. The other six are arranged in the shape of the Southern Cross, a star constellation visible in the Southern Hemisphere and depicted on the New Zealand flag, among others.

The memorial's inscription only speaks in general about "times of war" not specifically mentioning WW1 and 2. But we've made the link since we think it's intended.

This section lists the subjects commemorated on the memorial on this page:
New Zealand memorial

bonds between New Zealand and the United Kingdom

This section lists the subjects who helped to create/erect the memorial on this page:
New Zealand memorial

Unveiled on the 60th anniversary of The Mousetrap, this bronze, 2.5 m high 'b...