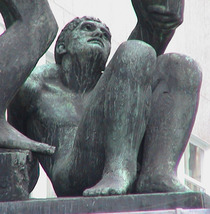 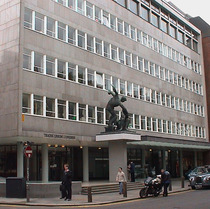 From TUC: "The front of the building is dominated by a bronze sculpture by Bernard Meadows representing the spirit of trade unionism with the strong helping the weak."

We have read that this sculpture is a war memorial but we think there has been confusion with the Epstein Pieta.

This section lists the subjects commemorated on the memorial on this page:
Trade Union sculpture

This section lists the subjects who helped to create/erect the memorial on this page:
Trade Union sculpture

Sculptor.  Born Norwich.  Professor of sculpture at the Royal College of Art,...

This section lists the other memorials at the same location as the memorial on this page:
Trade Union sculpture

The plaque is laid into the paving to the east of the fruit. Reading our phot...

Ava lived in Ennismore Gardens, in the first floor apartment the windows of w...