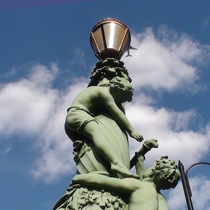 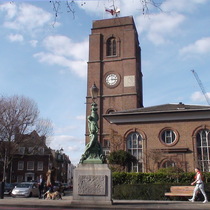 {Inscribed on a stone plaque on the plinth, on the north, pavement, side:}
Chelsea Embankment opened May 1874.
Lieut. Col. Sir James Macnaghten Hogg, KCB, MP, Chairman of the Metropolitan Board of Works.
Sir Joseph William Bazalgette C.B. Engineer.

There were at least 3 designs for lamps along the Thames Embankments. This one, by Timothy Butler, was used rarely so it is a pleasure to see it here, with the agile boys passing a torch up to light the lamp. It is one of a pair, the other being at Albert Bridge.

Note: it's difficult to take photos of the sky in parts of West London without Heathrow putting in an appearance!

The plaque is in the church porch.  A nearby AFS plaque for Yvonne Green references this one. Green was the only one of the five people killed who was a member of the AFS.

2018: The Library Time Machine reports on an unusual painting of the old church.

This section lists the subjects commemorated on the memorial on this page:
Chelsea Embankment - Old Church

Civil engineer. Born in Enfield.  As chief engineer of the Metropolitan Board...

Politician and civil administrator. Born in Calcutta. The elder brother of Qu...

This section lists the subjects who helped to create/erect the memorial on this page:
Chelsea Embankment - Old Church

An iron foundry set up by Abraham Darby in Shropshire.

This section lists the other memorials at the same location as the memorial on this page:
Chelsea Embankment - Old Church