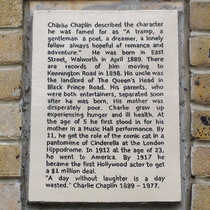 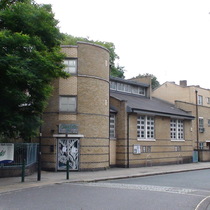 Charlie Chaplin described the character he was famed for as "a tramp, a gentleman, a poet, a dreamer, a lonely fellow always hopeful of romance and adventure." He was born in East Street, Walworth in April 1889. There are records of him moving to Kennington Road in 1898. His uncle was the landlord of The Queen's Head in Black Prince Road. His parents, who were both entertainers, separated soon after he was born. His mother was desperately poor. Charlie grew up experiencing hunger and ill health. At the age of 5 he first stood in for his mother in a Music Hall performance. By 11, he got the role of the comic cat in a pantomime of Cinderella at the London Hippodrome. In 1912 at the age of 23, he went to America. By 1917 he became the first Hollywood actor to get a $1 million deal.
"A day without laughter is a day wasted." Charlie Chaplin 1889 - 1977.

The BFI date the Hippodrome performance to Christmas 1900. The quote about a day without laughter may have been said by Chaplin but he was not the first.

We've numbered the mosaics left to right. The text plaque is to the right of the curved wall, just out of sight. Chaplin certainly lived his early life in the Lambeth area but we can find nothing to associate him with Lambeth Walk.

This section lists the subjects commemorated on the memorial on this page:
Chaplin - Lambeth Walk

This section lists the other memorials at the same location as the memorial on this page:
Chaplin - Lambeth Walk

This stone was laid by the Chairman, Sir W Alan Gillett, TD DL, on the twenty...

In RemembranceOn this site on the 16th August 1944 a V1 flying bomb fell resu...