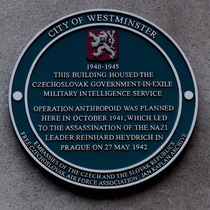 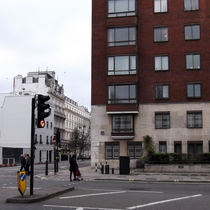 {Beneath the Czechoslovak coat of arms:}
1940 - 1945. This building housed the Czechoslovak government-in-exile military intelligence service. Operation Anthropoid was planned here in October 1941, which led to the assassination of the Nazi leader Reinhard Heydrich in Prague on 27 May 1942.
Embassies of the Czech and the Slovak Republics
Free Czechoslovak Air Force Association
Jan Kaplan archive
City of Westminster

The Czech base was on the sixth floor of this residential block.

December 2016, The Prague Daily Monitor suggests a lost plaque: “The Czech national oppression and resistance memorial centre opened … near Prague … The exhibition also shows the original memorial plaque from London's Porchester Gate where the assassination of high-ranking Nazi official Reinhard Heydrich was planned…”  But we think this was probably one of those brass name plates that you get at the entrances to large buildings such as block of flats.

This section lists the subjects commemorated on the memorial on this page:
Czechoslovak Government-in-Exile Military Intelligence Service

The code name for the assassination of SS-Obergruppenführer and General der P...

The informal title of the Czechoslovak National Liberation Committee. It was ...

This section lists the subjects who helped to create/erect the memorial on this page:
Czechoslovak Government-in-Exile Military Intelligence Service

Embassy of the Czech Republic

Located at 26 - 30 Kensington Palace Gardens, the building occupies the site ...

Embassy of the Slovak Republic

Site of Doctors' Commons, demolished 1867.Corporation of the City of London