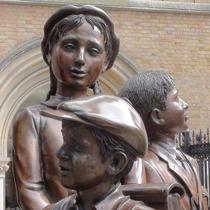 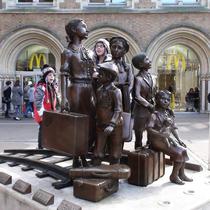 {On a plaque on a nearby wall:}
Hope Square, dedicated to the Children of the Kindertransport, who found hope and safety in Britain through the gateway of Liverpool Street Station.
Association of Jewish Refugees, Central British Fund for World Jewish Relief, 2006.

{On a plaque behind the statues:}
Children of the Kindertransport
In gratitude to the people of Britain for saving the lives of 10,000 unaccompied mainly Jewish children who fled from Nazi persecution in 1938 and 1939.
"Whosoever rescues a single soul is credited as thought they had saved the whole world." Talmud

{On a plaque attached to the railway track behind the statues:}
Frank Meisler, Arie Ovadia, 2006

Such a sad and touching subject, these children can't fail but bring to mind the many thousands of children who did not survive. The sculptor, Meisler, was one of the children saved.

However, it seems all statues of children must fall into one of two camps: kitschy sweet, or creepy in a 'Village of the Damned' sort of way. And, to our eyes, these land squarely in the latter group.

There are other related statue groups by the same sculptor at a number of other stations including: the main Railway Station in Gdansk, Poland; Dammtor Bahnhof Hamburg; Friedrichstrasse Railway Station Berlin; Ferry Port Rotterdam.

This site used to be occupied by another Kindertransport sculpture, by Flor Kent. That was removed before 2006, and then reinstalled in a different form, in the lower level of the station in 2011.

This section lists the subjects commemorated on the memorial on this page:
Kindertransport - Meisler

This section lists the subjects who helped to create/erect the memorial on this page:
Kindertransport - Meisler

A sculptor who frequently works alongside Meisler.