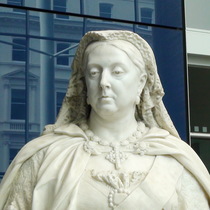 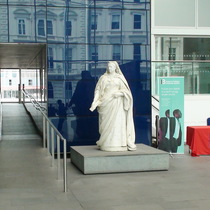 {On the granite 'floor' on which she stands:}
Unveiled by Her Majesty The Queen to mark the Centenary of Imperial College London, 9 July 2007.

{On the marble base of the statue, to the left:}
J. E. Boehm

Victoria and Albert have a long-standing association with Imperial College due to it being in an area designated for cultural and scientific advancement at the time of the Great Exhibition. As evidenced by the college mascots being furry lions named Vicky and Al.

Imperial College gives this history of the statue: It was commissioned by the University of London for the 1887 Golden Jubilee. At the time their offices were in the Imperial Institute so that is where the statue lived, until they moved out to the purpose-built Senate House in the 1930s, leaving the statue behind, giving it to Imperial College whose campus occupied the nearby buildings.

The statue used to have a crown but this went missing sometime between 1968 and 2006. Wonder if students had anything to do with this?

2022: we came across a print showing this statue in Burlington House at an imposing turn on a staircase, captioned "Jubilee of the University of London, New Statue of the Queen at Burlington House, recently unveiled by HRH the Prince of Wales. Illustration for The Graphic, 18 May 1889". The University's birth and Queen Victoria's reign were only a year apart so they effectively shared jubilees.

This section lists the subjects commemorated on the memorial on this page:
Queen Victoria at Imperial College

This section lists the subjects who helped to create/erect the memorial on this page:
Queen Victoria at Imperial College

{On a plaque laid into the ground in front of the statue:}George Frederic Wat...