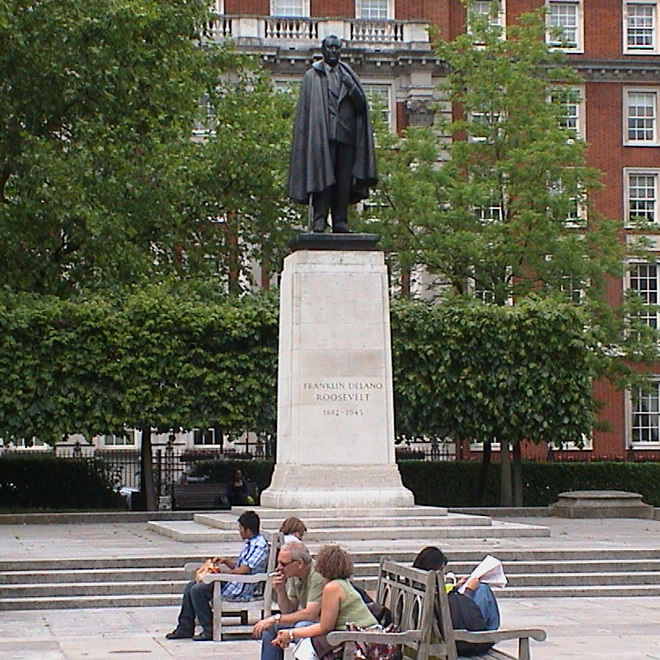 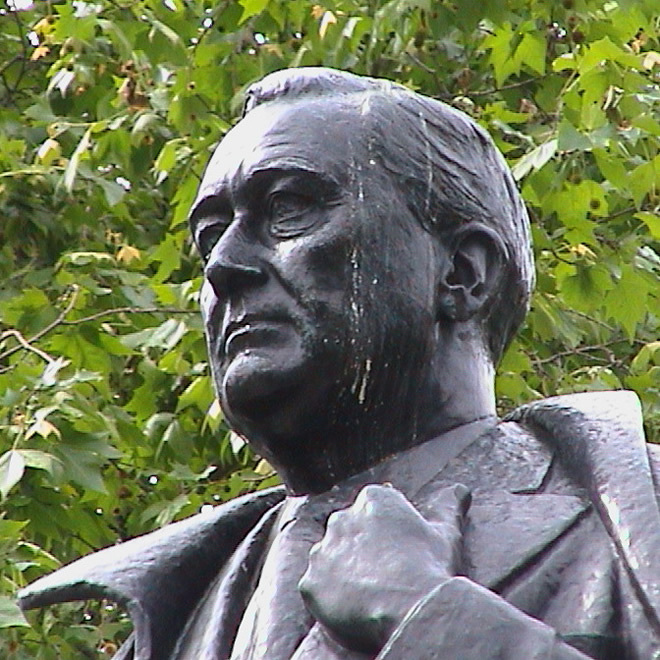 {The statue’s pillar is at the centre of a raised platform with a low stand at each corner. On the top of each of these a date is carved, clockwise from south-west corner:}
1932
1936
1940
1944
{These are the dates of the four Presidential elections that he won.}

{On either side of this platform there is a paved area with seating and a fountain at the centre. Carved into the walls of these area are the phrases:}
Freedom from want.
Freedom from fear.
Freedom of speech.
Freedom to worship.

This is a rare representation of Roosevelt standing, albeit with a stick. A notice board informs: "This memorial represents contributions in small sums from people in every walk of life throughout the United Kingdom who wished to remember him. It owes its inception to the pilgrims of Great Britain who through a memorial committee took the necessary steps to secure its erection. It was unveiled by Mrs Franklin Delano Roosevelt in the presence of King George VI." And we thank Jamie Davis for finding this link to the British Pathe news film of the unveiling.

The gardens, previously oval, were re-planned as part of the installation of this statue.

Note: Carl Larsen draws our attention to one memorial that could be here but isn't: while walking in Grosvenor Square on 14 July 1965 Adlai Stevenson, the American politician, suffered a heart attack and died later that day at St George's Hospital.

In his 1875 ‘The Way We Live Now’ Anthony Trollope describes an event in this garden: an assignation between a young lady who lives in Grosvenor Square and her lover:

“Marie had the key of the gardens for her own use and had already learned that her neighbours in the square did not much frequent the place during church time on Sunday morning. ... Sir Felix ...{had} been assured by Didon {Marie’s maid} that the gate should be left unlocked, and that she would be there to close it after he had come in.” At the end of the meeting Marie says: “ ‘There’s Didon. Nobody’s looking and she can open that gate for you. When we’re gone, do you creep out. The gate can be left, you know. Then we’ll get out on the other side’. Marie was certainly a clever girl.” (p.382-7, vol.1, Penguin 2001)

This is such a large square we find it difficult to imagine it locked, for the use of residents only, but there it is.

The 1955 film The Case of the Red Monkey has a scene with two characters leaving the, then, American embassy (number 41, presumably one of the many buildings it occupied in Grosvenor Square) and being amused by two loud-mouthed American servicemen photographing themselves in front of this statue.

2018: Reporting on the return of the management of this garden from the Royal Parks to the Grosvenor Estate (following the departure of the US Embassy) Ian Visits confirms that, having been laid out in 1722, the garden was closed to the public in 1835. It was the 1946 plan to erect this statue that caused the garden to be, once more, open to the public.

2021: Ian Visits shared the plans for the transformation of Grosvenor Square into an "urban garden".

This section lists the subjects commemorated on the memorial on this page:
Roosevelt statue 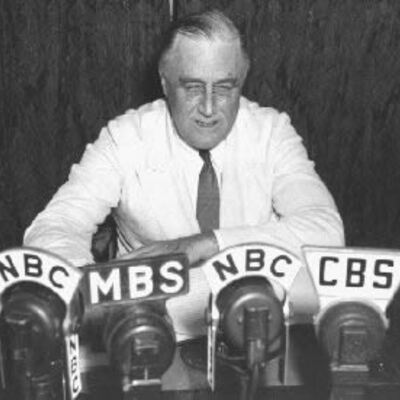 This section lists the subjects who helped to create/erect the memorial on this page:
Roosevelt statue 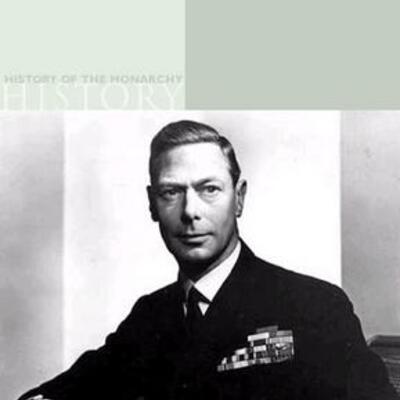 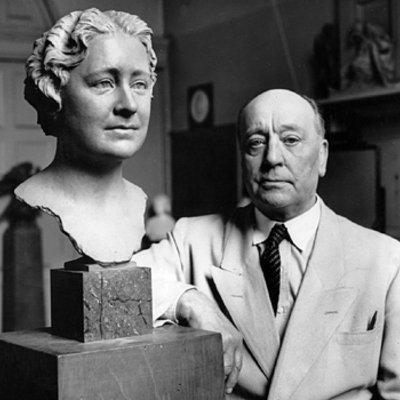 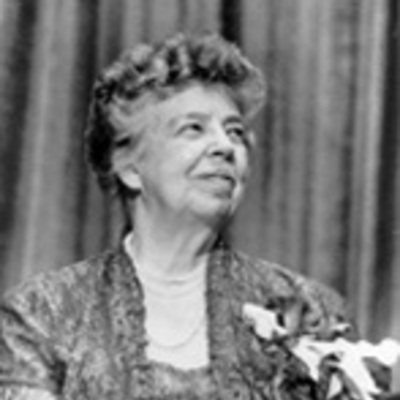 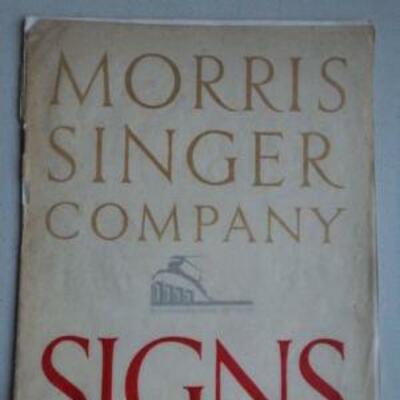 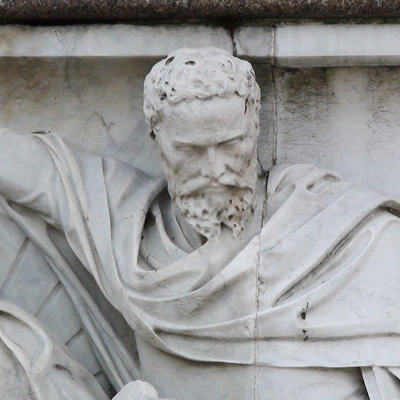 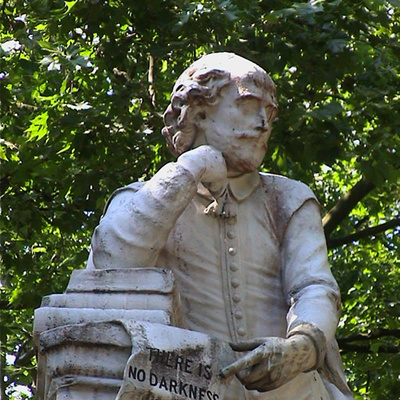 "There is no darkness but ignorance" is a quote from "Twelfth Night". The sculptor, Fontana, copied the statue by Scheemakers in Westmins... 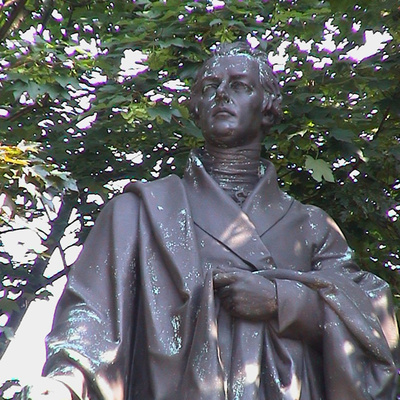 According to an information board in the square this bronze statue was erected in 1831 and survived an attempt by Reform Bill agitators ... 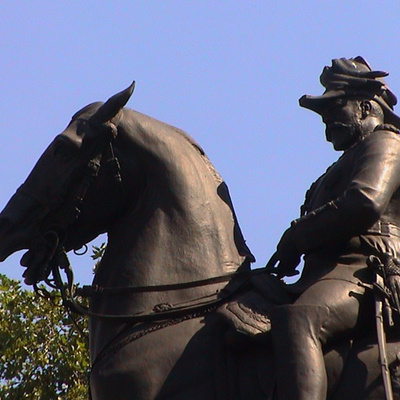 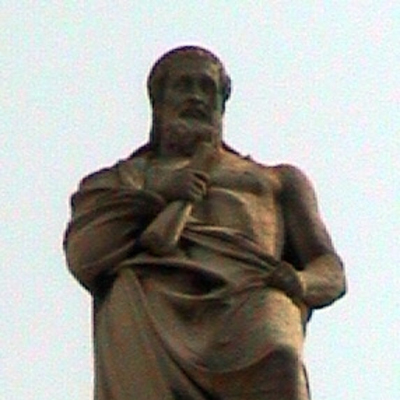