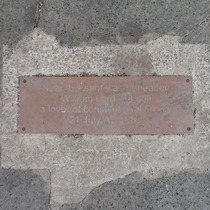 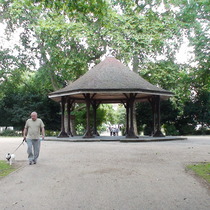 Near this spot was beheaded William Lord Russell, a lover of constititutional liberty.
21 July AD1683

Lincoln's Inn Fields was the site of the gruesome and prolonged public beheading of Lord William Russell in 1683, after he was convicted of being part of the Rye House Plot against King Charles II. The executioner, Jack Ketch, was so inept that he took four axe blows to separate the head from the body. After the first failed blow his victim looked up and said "You dog, did I give you 10 guineas to use me so inhumanely?".

We first heard about this memorial many years ago but repeatedly failed to find it until one day in 2014 we walked through this bandstand and spotted this plaque laid into the floor at the centre. Back in 2007 the plaque was vandalised (possibly stolen) and was subsequently replaced with this very basic one. The cement setting suggests the previous one was bigger, possibly much older and more attractive.

This section lists the subjects commemorated on the memorial on this page:
Lord William Russell's beheading

This plaque is not particularly interesting visually so we are showing the ro...

These buildings were erected in the year 1891 by J. Studds &amp; Son of Barre...

To the glory of God this stone was laid by the Right Honourable Lord Mayor of...