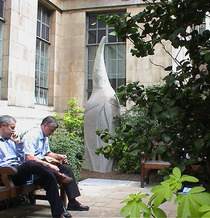 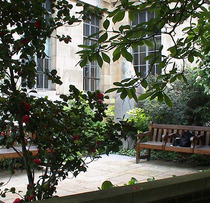 The 10-foot high sculpture in Gelligaer bluestone was unveiled on Glyndwr's Day, 16 September 2001, by Sian Phillips.

From a modern information board:
Catrin Glyndwr - St Swithin's Memorial
St. Swithin's garden is the site of the burial of Catrin Glyndwr, daughter of Owain Glyndwr the Welsh hero, and of two of her children. Catrin was captured in 1409 at Harlech and taken to the Tower of London with her children and her mother, Glyndwr's wife, during Owain's fight for the freedom of Wales. Catrin, son Lionel and her daughters were important hostages as potential heirs to the throne of England through Catrin's marriage to Edmund Mortimer.

By 1413 the force of Owain Glyndwr's uprising was spent and the new king Henry V took the throne in March. by December Catrin and two of the children were dead and their burial, in 1413, at St Swithin's in recorded in Exchequer documents.

"for expenses and other charges incurred for the burial and exequies of the wife of Edmund Mortimer and her daughters, buried within St Swithin's Church London . . . £1."

St. Swithin's is significant as the only documented burial site of a member of Owain Glyndwr's immediate family. The memorial sculpture in the garden is dedicated to Catrin Glyndwr, but also the suffering of all women and children in war.

2020: Prompted by Martin Taylor we tried to find a translation of the poem, and came across Americymru which has an interview with the poet in the middle of which:

"I was asked to write two lines about Catrin Glyndwr for a statue that was erected to her in London and I wrote –Godre twr adre nid aeth
[At the tower end –far away from home]
Aria ei rhyw yw hiraeth
[Longing is a woman’s song]".

St Swithin's was badly bombed in WW2, demolished in 1962. and eventually replaced with this garden.

May 2011: We learn from Discovering London that this garden has recently been remodelled and the memorial resited, due to the construction of the huge modern Walbrook Building. We've moved the pin but have not yet replaced the photos. Sometimes we think it's better to keep the old photos as a record of what used to be. What do you think?

This section lists the subjects commemorated on the memorial on this page:
Catrin Glyndwr

suffering of all women and children in war

This section lists the subjects who helped to create/erect the memorial on this page:
Catrin Glyndwr

Poet and writer in Welsh.

Born Bettws, Carmarthenshire, Wales. Married to Peter O'Toole through the 60...

{On a stone plaque below the statue:}The Blewcoat School, built in the year 1...