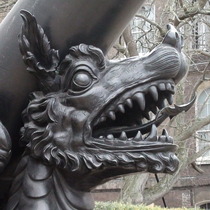 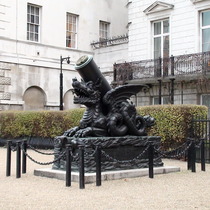 {All text is on the plinth. On the north side in Latin and the south side in English:}
To commemorate the raising of the siege of Cadiz, in consequence of the glorious victory gained by the Duke of Wellington over the French near Salamanca, on the XXII of July MDCCCXII {22 July 1812}.  This mortar cast for the destruction of that great port, with powers surpassing all others, and abandoned by the besiegers on their retreat was presented as a token of respect, and gratitude, by the Spanish nation to his Royal Highness the Prince Regent.

{On the east end:}
Constructed in the Carriage Department, Royal Arsenal.
Earl of Mulgrave, Master General, 1814.

On their withdrawal the French deliberately destroyed their cannons. The Spanish must have retrieved and restored this mortar before presenting it, in gratitude, to the Prince Regent. Its mounting on a cast-iron Chinese dragon was possibly the construction work carried out by the Carriage Department. We can't discover how the British acquired the dragon (gift or swag being the two main options).

Note: 'mortar' in a military context means "a muzzle-loading cannon having a short barrel and relatively wide bore that fires low-velocity shells in high trajectories over a short range", but you probably knew that already.

This section lists the subjects commemorated on the memorial on this page:
Cadiz Memorial

This section lists the subjects who helped to create/erect the memorial on this page:
Cadiz Memorial