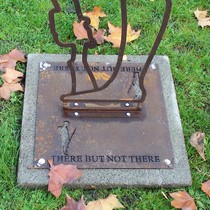 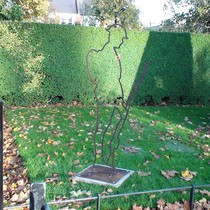 Sculpture: There but not there

There but not there

Site: There but not there (1 memorial)

The south-east corner of this park is a fenced off formal garden, through which one can walk. We visited on the Saturday before Remembrance Sunday, 2019, and found one of these sombre outline statues at each of the two entrances.

These poignant silhouettes were part of a 2018 nationwide fund-raising art installation called ‘There But Not There’. We don't know how many of these identical soldiers were installed across Britain. We found our 'Tommy' in 2019 which suggests that the installation/campaign has been extended or revived.

Sustans have used a similar technique to create individualised portraits, of which we have found and published 18, so far (2020).

The word silhouette is derived from the name of Étienne de Silhouette, a French finance minister who, in 1759, was forced by France's credit crisis during the Seven Years' War to impose severe economic demands upon the French people, particularly the wealthy. Because of de Silhouette's austere economies his name became synonymous with anything done or made cheaply. Prior to the advent of photography, silhouette profiles cut from black card were the cheapest way of recording a person's appearance.

This section lists the subjects commemorated on the memorial on this page:
There but not there

Unveiled on the 60th anniversary of The Mousetrap, this bronze, 2.5 m high 'b...