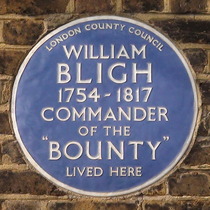 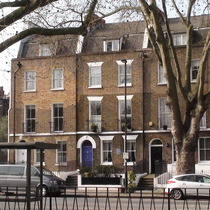 London SE1 reported this house was for sale at £2.75m: "100 Lambeth Road was Bligh's home from 1794 onwards, but he left his family behind when he was appointed governor of New South Wales in 1805. After his death in 1817 Captain Bligh was buried in the churchyard of St Mary-at-Lambeth and his Coade stone tomb is now the centrepiece of the Sackler Garden at the Garden Museum." If you are quick you can sleep in the house, since the report adds that "Bed and breakfast accommodation is currently offered in the house at £125 a night."

August 2021: another agent has the price at £2.25m, which still seems a lot for a house described with "Some rooms have dark purple ceilings, while others have interesting yellow carpets in need of refreshing."

This section lists the subjects commemorated on the memorial on this page:
Captain Bligh - SE1

This section lists the subjects who helped to create/erect the memorial on this page:
Captain Bligh - SE1

Residents of Ferdinand Place who died in WW1

Robert Davies and his mother Christine, one of the Thomas grand-daughters, to...

Unveiled on Hancock's 90th birthday by scriptwriters Galton and Simpson.