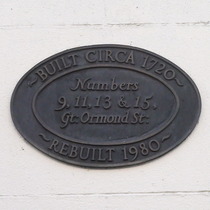 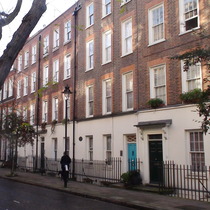 We'd hoped to find more information about the early buildings, perhaps a picture, but we found nothing. We are thankful that the new-builds have good, modest facades but we wonder what was so wrong with the originals that they had to go.

2017: Tom Long solved this puzzle by pointing us at Pevsner’s Buildings of England, London 4: North. The stretch east of Lamb’s Conduit Street was developed by Millman c.1721. UCL specifies Sir William Milman {sic} who died in 1713 so there’s a contradiction here we can’t reconcile. Anyway, Pevsner goes on: “The condition of many of the houses became a scandal in the 1960s, and in 1974 Nos 9-15 were partly demolished as dangerous structures.  Camden acquired Nos 1-17 in 1975, and major repair began by Donald Insall & Partners. The first conversions to flats, Nos 1-7 on the south side succeeded in retaining original panelling and staircases … Nos 9-15 are entirely new, with replica facades of 1980.”

The street between Lamb's Conduit Street and Millman Street began life as Little Ormond Street. By 1799 it was New Ormond Street which it remained until sometime between 1862 and 1912.