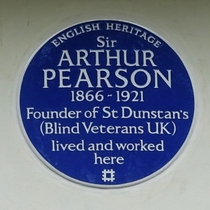 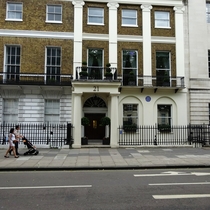 "Pearson invited the first two officers to attend St Dunstan’s to live with him in his home in Devonshire Street in Marylebone, but when more accommodation was needed he took up Sir John Stirling-Maxwell’s offer of his house at 21 Portland Place. The Pearsons lived at number 21 with single officers while the spare rooms in their Devonshire Street home were used as accommodation for the women who cared for the servicemen.

Records show that number 21 was used by St Dunstan’s from August 1915 until August 1920, although it is not known how long Sir Arthur and his wife resided here. Pearson recalled that ‘Each Thursday evening some distinguished person dined with the blinded officers’ and delivered an informal lecture in the room known as the ‘Big Lounge’. It was here, Pearson claimed, that ‘the blinded officers spent the most interesting evenings of their lives’."

This section lists the subjects commemorated on the memorial on this page:
Sir Arthur Pearson

This charity was founded at the start of WW1 by Arthur Pearson, the newspaper...

Newspaper publisher and philanthropist. Born in Wookey, Somerset. In 1898 he ...

This section lists the subjects who helped to create/erect the memorial on this page:
Sir Arthur Pearson