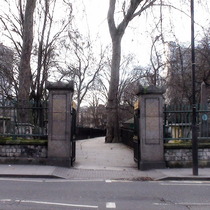 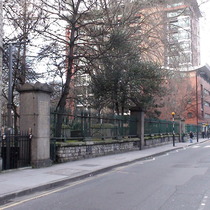 {On the pier to the left of the entrance:}
This burial ground of the nonconformists known anciently as Bunhill in the Fields was enclosed with a brick wall at the sole charge of the City of London in the Mayoralty of Sir John Lawrence knight Anno Domini 1665 and afterwards the gates hereof were built and finished in the mayoralty of Sir Thomas Bludworth knight Anno Domini 1666.

This burial ground was badly damaged during the war of 1939 - 45. Restoration undertaken by the Corporation of London in 1964 included the laying out of part of the ground as a public garden.

{On the pier to the right of the entrance:}
Bunhill Fields
At the time of the closing of this ground in 1852 more than 120,000 bodies had been interred therein. In the year 1867 it was committed by Act of Parliament to the care of the Corporation of London and having by them been planted and restored for public resort, it was opened by the Rt. Honrl. James Clarke Lawrence MP, Lord Mayor on the 14th of October 1869.

Charles Reed Esq MP Chairman of the Committee for the Preservation of this ground.

It would be nice if the two Lord Mayor Lawrences were related but we can't confirm. The wall and gates erected in 1665-6 are not those we see today. These we imagine were installed as part of the 1869 garden restoration, along with these 5 inscribed piers.

The 5 piers on the City Road boundary each carry a golden inscription.  We list them here south to north.

Historical Trinkets gives a good history of this burial ground, together with photos of many of the tombs.  As well as the names given on the piers we understand the following were also buried here: Richard Price (see scientific life assurance), Thomas Newcomen, Susanna Wesley, grandfather of J. R. R. Tolkien and Thomas Bayes, originator of inverse probability theory.

Note the Quaker Bunhill Fields Burial Ground is nearby but not the same place.

This section lists the subjects commemorated on the memorial on this page:
Bunhill burial ground - 3 & 4

This section lists the subjects who helped to create/erect the memorial on this page:
Bunhill burial ground - 3 & 4

Politician. Member of the Society of Antiquaries of London. Director and Trus...

This section lists the other memorials at the same location as the memorial on this page:
Bunhill burial ground - 3 & 4