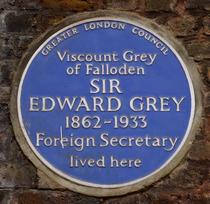 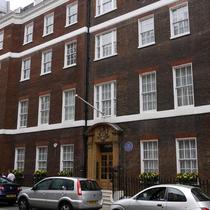 2020: Tatler reported that new luxury flats in this building, with interiors designed by David Armstong-Jones, son of Princess Margaret, are being sold for figures up to £9 million. Tatler also gives some history of the house saying that after Sir Edward had gone it "It then became the headquarters of Holland, Hannen and Cubitts, the legendary building firm responsible for the likes of London’s Cenotaph in Whitehall and the East Front of Buckingham Palace. Henry Cubitt (later the 4th Baron Ashcombe) joined Holland, Hannen and Cubitts in 1949, eventually rising to become chairman. He was the uncle and godfather to the then Camilla Shand – now Her Royal Highness the Duchess of Cornwall – and Prince Charles’s wife reportedly fondly recalls visiting the offices at 1 Queen Anne’s Gate all those years ago."

This section lists the subjects commemorated on the memorial on this page:
Sir Edward Grey

This section lists the subjects who helped to create/erect the memorial on this page:
Sir Edward Grey