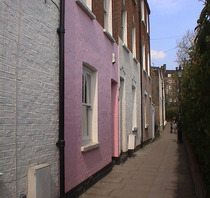 This plaque is extremely difficult to read, especially at the top. It is also rare, being, as far as one can tell, a private plaque commemorating the fallen in WW1. The residents of the street believe the shield is made of marble alabaster. They put poppies on it each Remembrance Day and are appealing for any information about the plaque and the people commemorated.

We found this memorial in about 2004 and transcribed it as best we could. Then in 2014 Andrew Whitehead very kindly sent us an article from the Camden New Journal of 9 November 2000 which reported the findings of Carl Crane, an amateur historian. All the following information and that on our pages for the 10 Commemorated subjects comes from that article (for which we cannot provide a link: the CNJ was not publishing on-line in 2000.)

All the named soldiers lived in College Lane, served in the Camden Town-based 19th London Regiment and died in WW1. The Imperial War Museum believes this to be “the only wall mounted memorial in London and only one of three in Britain”. This must be a misunderstanding since there are many WW1 wall-mounted memorials, e.g. St Bartholomew's WW1 memorial and New Court WW1 memorial. Perhaps the word “private” is missing from the IWM’s description of this plaque’s rarity. We certainly agree that this memorial is extremely unusual and if the 10 men really did all live in College Lane, that makes it immensely tragic as well, since the Lane is a short street with not many houses, all small.

Our colleague Andrew Behan has researched some of the names and made two sad discoveries: The deaths of Barrett and Biggs left two sisters widows; and Fred Britcher's mother learnt of her son's death in a newspaper.

The street at the end of this one, Little Green Street, was the site of the Kinks video for the 1966 "Dead End Street".

This section lists the subjects commemorated on the memorial on this page:
WW1 plaque in College Lane

Abbotsbury Gate - Holland ParkMade possible by the bequest of the late Miss J...

The plaque has added an extra "t" to "Crabet".