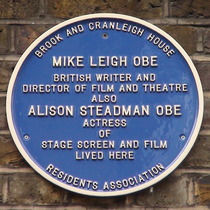 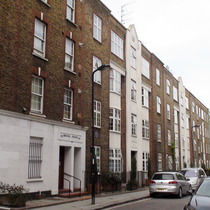 Unveiled by Simon Callow who has never worked on a Leigh movie though he and Steadman worked together on the 2003 film Hans Christian Andersen. We don't think that is sufficient reason for his involvement with this plaque; we think he was here to unveil the nearby Dickens' plaque and was happy to do another.

Early in their life together, in the early 1970s, Leigh and Steadman lived here in a top-floor flat.

In our photo, at the top of the nearest cream-coloured panel on this building: "GB 1934" but we don't understand the 'GB'.

The Maestri plaque is on one of a cluster of planters that can't be seen in our picture because of the car. But you can see the Paddington clock which is directly above them and may indeed be part of the memorial.

2018: Timothy Thomas helpfully informs via Facebook that the clock "is not a part of any memorial,but there to let passers by know what time it is" and that "G.B.refers to George Brooks,whom the flats were named after."

This section lists the subjects commemorated on the memorial on this page:
Mike Leigh & Alison Steadman

This section lists the subjects who helped to create/erect the memorial on this page:
Mike Leigh & Alison Steadman

This section lists the other memorials at the same location as the memorial on this page:
Mike Leigh & Alison Steadman

{On the plaque between the two charity scholars:}St Mary Rotherhithe free sch...

Sarah Bernhardt laid the foundation stone of this building 1904.