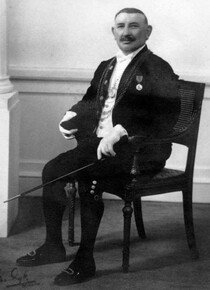 We found this at Commercial Motor Archive, 11 March 1938: "The haulage industry has an ally in the person of the Deputy-Mayor of Doncaster. Alderman Samuel Morris. Speaking at the annual, dinner of the Doncaster Division of the C.M.U.A., he said that too much favour had been shown to the railways when questions of road transport were dealt with. He had always been a strong advocate of road transport, the Deputy-Mayor went on, which had assisted the manufacturer, not only economically, but by prompt delivery. Doncaster was very proud that it was a railway centre. He had been in business in Doncaster for nearly 45 years and in that time the L.N.E.R. Co. had been very progressive and had done a great deal for the town, but one could not get away from the fact that the same goods station, which existed 50 years ago, had not been enlarged or improved."

Samuel Morris was born as Morris Samuels on 3 September 1872 in Yanishka, Kovna, Russia (now Kaunas, Lithuania), one of the ten children of Jacob Samuels (1840-1923) and Fanny Samuels née Schapiro (1848-1904). A younger brother, Harry Morris (1893-1954) was to become a Labour Party Member of Parliament for Sheffield Central, who stood down immediately after the 1950 general election to enable Sir Frank Soskice to re-enter Parliament, for which service he was ennobled and became an hereditary peer, the 1st Baron Morris of Kenwood.

The 1901 census shows him living at 118 St Sepulchre Gate, Doncaster, Yorkshire, with his wife and children, recording his occupation as a Wall Paper Dealer.

On 12 March 1902 he was initiated as a Freemason in the Zion Lodge No.1798 that met in the Grand Hotel, Aytoun Street, Manchester, giving his occupation as a Paper Manufacturer. and living at St Sepulchre Gate.

On 1 January 1904 he joined the St. George's Lodge No.242 that met in the Masonic Rooms, Nether Hall Road, Doncaster, giving his address as Balby, Doncaster and his occupation as a Paper Merchant. He then resigned from the Zion Lodge No.1798 on 13 January 1904.

In 1904 he was elected as a member of Balby-with-Hexthorpe Urban Council which became part of Doncaster Borough Council in 1914 and on which he served until 1945.

In January 1905 he applied to become a British Naturalized Subject and this was granted on 7 February 1905. He gave his address as 47 Balby Road, Doncaster and his occupation as Paper Merchant and Horse Dealer.

The 1911 census confirms he was still living at 47 Balby Road, Doncaster, with his wife and children and he was still a Wallpaper Merchant.

Electoral registers for 1918 show him registered to vote both at his shop address at 105 Sepulchre Gate, Doncaster and his abode of 47 Balby Road, Doncaster.

In 1918, together with 32 other freemasons he petitioned the United Grand Lodge of England to create a new lodge to be called the Don Valley Lodge No.3890. The warrant for its formation was granted on 14 October 1918 and it was consecrated on 15 January 1919. This Lodge met at the Masonic Hall, Priory Place, Doncaster, however he resigned from this Lodge on 20 April 1920.

He served as Mayor of Doncaster Borough Council for 1920-1921 and was elected as an Alderman on the council in 1923. He again served as Mayor for 1936-1937 (see the photograph taken at the second Mayoral making ceremony)  and was made a Freeman of the Borough in 1937.

Electoral registers from 1933 show him and his wife living at 17 Avenue Road, Doncaster, but confusingly the 1939 England and Wales Register gives his date of birth as 3 September 1874 and his address as 18 Avenue Road, Doncaster. He was shown as a Wallpaper Manufacturer and Chairman of A.R.P. Services.

Probate records confirm that he died, aged 78 years, on 2 December 1950 at Denison Nursing Home, Leeds, Yorkshire and that his home address had been 'Greenbank', Avenue Road, Doncaster. When probate was granted on 10 May 1951 his effects totalled £162,921-9s-2d.

He was buried in Rosehill Cemetery, Ascot Avenue, Doncaster.

This section lists the memorials where the subject on this page is commemorated:
Alderman Samuel Morris

Born St Albans.  As a priest he followed the Lollard doctrine which advocated...