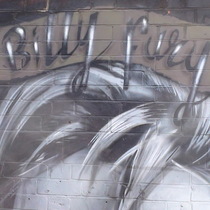 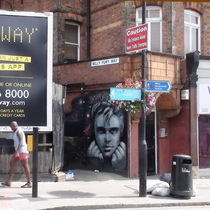 Fury lived in Cavendish Road NW6 and recorded songs in the nearby Decca Studios in Broadhurst Gardens NW6.

Following a poll the path was named after Fury in 2010 and the following year this mural was installed in an attempt to deter anti-social behaviour.

2018: Sadly, the Camden New Journal report that, due to extensive graffiti they have had to black out the mural.

August 2018: the CNJ reports that the mural has been repainted and it is hoped that this time it will be protected with a screen this time. The artist prefers to remain anonymous.

August 2018: We can hardly keep up. The CNJ reports that after only a few days the mural was again painted over.

This section lists the subjects commemorated on the memorial on this page:
Billy Fury mural

This section lists the subjects who helped to create/erect the memorial on this page:
Billy Fury mural