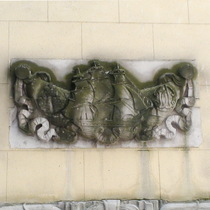 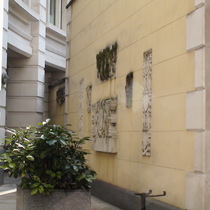 {Sailing ship, 3 crowns to left, and monogram to right:}
TCCT

The monogram is TC followed by CT written backwards, part of Coutts's symbol, which also includes the 3 crowns. A ship does not normally feature in Coutt's symbol, so we are not certain why it is so prominent here.

This section lists the subjects commemorated on the memorial on this page:
Bankers Clearing House - 3

This section lists the other memorials at the same location as the memorial on this page:
Bankers Clearing House - 3

April 2015: this plaque and coat of arms have been removed. We didn't searc...