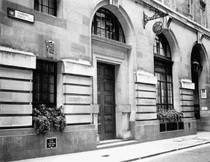 In 1976 a statue by Robert Berkoff was erected in Trentham Gardens, Trentham (a suburb of Stoke-on-Trent) to commemorate the transfer of the clearing banks in WW2. Trentham Gardens is the site of a grand country house and estate. The Central Clearing House functions were run from the ballroom and banqueting suite, 1939-46. "Space in the new site was divided up according to the number of clearing articles handled by each bank. The big five (Barclays Bank, Lloyds Bank, Midland Bank, National Provincial Bank and Westminster Bank) found themselves on the dance floor, one of the smaller members took the stage, another was based in an outbuilding and the Bank of England was above the kitchen."

Born in Strasbourg as Marie Grosholtz. Her mother worked for Dr Curtius, a wa...