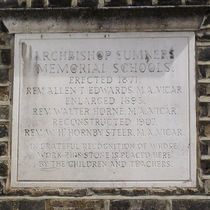 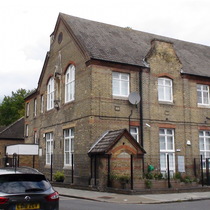 In grateful recognition of whose work this stone is placed here by the children and teachers.

The plaque is on the left side of the building, beside the white panelling on the low modern extension.

The school's website gives no history but does say "The school is very closely linked with the Parish of North Lambeth." St Philips Church (1863 - 1973) used to stand immediately behind the building in our photo, on the corner of Reedworth Street and Kennington Road. Archbishop Tait opened this school on 18 October 1871. The British Library have an 1884 advert for "Archbishop Sumner's Memorial Schools, Kennington Road" that gives Rev. Allen T. Edwards as the President. Being the President of the school was probably part of the job of being vicar of St Philips.

Lambeth have a photo of the school and the church behind, c.1975. Photo of the church from the front. More information at AIM and Southwark Anglican (which has another photo).

This section lists the subjects commemorated on the memorial on this page:
Archbishop Sumner's Memorial Schools

Born Warwickshire. Bishop of Chester 1828 - 48 when he was elevated to Archbi...

We believe that, for all the livery companies, their Halls should be named wi...

William Blake was born on 23rd November 1757 in a house which stood on this s...