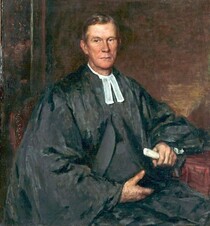 Biblical Studies: The Rev. W. H. Hornby Steer, MA, St John's College, Cambridge, Senior Curate of St Jude's Church, South Kensington, has been appointed Vicar of St. Philip's Lambeth, a parish with a population of nearly 12,000. He was ordained by the late Archbishop Benson in 1886, and was licensed to the Curacy of Christ Church, Tunbridge Wells, where he remained until 1892. He then came as Senior Curate to St. Jude's ... , at the time when the Rev. Prebendary Eardley-Wilmot entered upon his duties there as Vicar. ... Steer is a lecturer of the London Diocesan Church Reading Union, and is one the committee of several Church societies.

'Moral Mapping of Victorian and Edwardian London' by Thomas R.C. Gibson-Brydon, 2016, carries a contemporary word portrait of Rev. Steer, who was a vicar at St Phillip's in Lambeth in 1899: ".. a tall man with a good profile, strong in cut-line, clean shaven ... a dignified ecclesiastic. When I was shown into the Vestry a few minutes afterwards the surplice had been thrown on one side, the cassock was half unbuttoned, and, still with a good strong face of his own, he was just an ordinary mortal sweltering, like everybody else on that hot July afternoon. We began to talk, but one of the women who had brought her children to be baptised was still waiting, and ... he asked if I would excuse him as the woman was waiting to be churched.  Of course I agreed, and on went the surplice again; the man vanished (or was obscured) the cleric reappeared ... In two or three minutes he was back again, an ordinary, hot, untidy man. His age is about 32; he has only been in the parish for about a year, and has made the plunge into it from the wealth of S. Jude's, S. Kensington. He looked a little harassed by his new responsibilities, but appears to welcome them on the whole, excepting the worry of raising funds."

Old Herefordians Club, 2nd Annual Handbook, 1938-1939 contains an obituary for Steer. When we first published this man, we assumed from the year of the obituary's publication that he had died on 31 May 1939. However our colleague, Andrew Behan, who found the image, discovered that he had died on 31 May 1938. Andrew confirms that the Rev. William Henry Hornby Steer was born in 1856 in Birkenhead, Cheshire, his birth being registered in the 3rd quarter of 1856 in the Wirral registration district. He was the second of the three children of Philip Steer (1810-1871) and Emma Steer née Harrison (1816-1898). His father was an artist.  His elder sister was Catherine Mary Cutmore Steer (b.1854) and his younger brother was Philip Wilson Steer (1860-1942).

In the 1871 census he was shown as one of eight male pupils at Spillman's Court, Rodborough, Gloucestershire, where the tutor was the Reverend Richard M. Hutchins. In the 1881 census he is described as an undergraduate at Cambridge University, residing at 23 Brunswick Road, Gloucester, with his widowed mother and his brother, together with a housemaid and cook.

On 16 April 1890 he was initiated as a Freemason in the Holmesdale Lodge No.874 that met in the Masonic Hall, Pump Room, The Pantiles, Tunbridge Wells, Kent. The membership register shows him as a clerk in holy orders living at 33 Mount Sion, Tunbridge Wells and this information is confirmed in 1891 census where he was shown living with his mother and his nephew - James Alexander Frederick Henry Hamilton (1876-1941), together with a housemaid and a cook.

On 8 June 1898 he married Maria Halse Morgan Reed at St Peter's Church, South Kensington, where the marriage register shows him as a clerk in holy orders living at 233 Kennington Road, London, SE, whilst his wife's address was recorded as 77 Onslow Gardens, London, SW. They had one son, William Reed Hornby Steer (1899-1993) whom he baptised on 14 June 1899 at St Philip's Church, Kennington.. The 1901 census lists him as a Church of England clergyman living at 119 Kennington Park Road, Kennington, with his wife and their son, together with a cook, a lady's maid, a housemaid, a kitchen-maid, a nurse and a male indoor servant.

On 14 March 1907 he was admitted as Freeman in the City of London. In the 1911 census he describes himself as a clergyman in the Established Church, living in a 20 roomed house at 52 Avenue Road, Regents Park, Hampstead, with his wife and their son, together with a butler, a cook, two housemaids, a lady's maid and a kitchen-maid.

This section lists the memorials where the subject on this page is commemorated:
Rev. W. H. Hornby Steer

Member of Kingston Spiritualist Church in 1927.

Dapifer (steward or cupbearer) to Henry I. Patron in 1096 of the Saxon St Ste...

The last remaining 'embassy chapel' as explained at Caroline's Miscellany and...