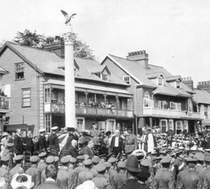 Vicar At St Philips Lambeth in 1895. Vicar at St. Saviour's in Brixton. Died Felixstowe where he was vicar. Information from EstateDocBox.

Our photo shows Horne at the dedicatory service of Felixstowe's WW1 memorial on 15 August 1920.

Our colleague, Andrew Behan, has conducted some research on this man. The Reverend Walter Horne was born on 29 May 1858 in Brixton, Surrey, the youngest of the eight children of Neale Horne (1815-1864) and Louisa Horne née Flower (1818-1894). His birth was registered in the 3rd quarter of 1858 in the Lambeth registration district and his father was a coal merchant.

In the 1871 census he is shown as scholar living at 1 St Ann's Terrace, Brixton Road, Stockwell, (this property was subsequently renumbered to 160 Brixton Road), with his widowed mother, his five surviving siblings: Neale, William, Louisa, Charles and Frank, together with a cook and a female general servant.

On 10 October 1879 both he and his brother Charles were admitted to the Freedom of the City of London by patrimony in the Company of Clothworkers. The 1881 census describes him as an undergraduate residing at 11 Grove Road, Stockwell, (Grove Road has subsequently been renamed as Grove Way), with his mother, two siblings; Louisa and Frank, together two female domestic servants.

He was shown as the curate of Christ Church, Brixton, in the 1891 census, living at 69a Cowley Road, Stockwell, with a housekeeper, the housekeeper's husband and a male boarder.

On 17 April 1895 he married Katherine Sarah Heinekey (1856-1923) at Immanuel Church, Streatham Common, where the marriage register shows him to be a Clerk in Holy Orders living at St Philip's Vicarage, Kennington Road, whilst his wife's address was recorded as Immanuel, Streatham Common.

They adopted a daughter who they called Dulcie Angela Horne (1901-1985). She had been born on 25 September 1901 in Wakefield, Yorkshire and had been baptised on 8 October 1901 in Huddersfield, Yorkshire. In the baptismal records at St Saviours Church, Brixton, on 11 November 1902 she was marked as 'Reception into the Church' with her foster parents named as Walter and Katherine Sarah Horne of St Saviour's Vicarage, Brixton Hill.

He completed the 1911 census describing himself as a Clerk in Holy Orders (Established Church) living in St Saviours Vicarage, Brixton Hill, a property of ten rooms, with his wife, their adopted daughter, a cook, a parlour-maid and a between-maid. Telephone directories from 1911 list him at The Vicarage, Felixstowe, Suffolk.

Probate records confirm that his wife died on 2 January 1923 at The Vicarage, Felixstowe, Suffolk and that when probate was granted to a John Henry Williams on 28 February 1923 her effects totalled £1,693-19s-8d. On 25 November 1925 he married May Ellen Charlton (1874-1964) at St John the Evangelist Church, Coulsdon, Surrey

On 2 June 1933 he and his wife are listed as arriving in Plymouth, Devon, in the manifest of RMS Strathaird of the Penisular & Orient Steam Navigation Company Ltd, having travelled tourist class from Gibralter, giving their home address as 'Branscombe' Thornley Road, Felixstowe. In the 1939 England and Wales Register he is shown as Clerk in Holy Orders - Retired, living at 10 Thornley Road, Felixstowe, with his wife and a female domestic servant.

Probate records state that he died on 3 February 1941 at 'Branscombe' 10 Thornley Road, Felixstowe and that when probate was granted to his widow on 16 April 1941 his effects totalled £967-5s-6d but were subsequently resworn when they totalled £917-0s-2d.

He was buried, along with his first wife and his sister Louisa Flower Horne in the churchyard of St Peter and St Paul's Church, Church Road, Felixstowe, IP11 9NF.

This section lists the memorials where the subject on this page is commemorated:
Rev. Walter Horne