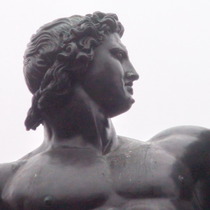 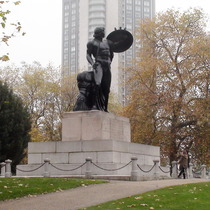 {On the upper plinth:}
To Arthur Duke of Wellington and his brave companions in arms this statue of Achilles, cast from cannon taken in the victories of Salamanca, Vittoria, Toulouse and Waterloo, is inscribed by their countrywomen.

{On the lower plinth:}
Placed on this spot on the XVIII day of June MDCCCXXII by command of His Majesty George IIII. {18 June 1822}

Modelled on the statue of Dioscuri in Rome. A gay friend of ours is fond of quoting Larry Olivier on this statue: "the best arse in London". We’ve read that this was the first public nude statue erected since antiquity, but can’t of course verify the statement. Possibly it refers just to London, and just to male nudity, since bare-breasted women have long been a feature of statuary. The splendid Ornamental Passions has something to say on the public response to this statue.

Achilles was the Greek hero of the Trojan War, a reference that would have been widely recognised when the statue was erected, 7 years after Wellington's success at the Battle of Waterloo. Bronze, 18 ft high, sculpted in all his glory, Achilles later acquired a bronze fig-leaf. Malcolm has a close-up picture showing the screws and has done some leaf research. Higher up, the face of this chubby-chinned hero is meant to have been modelled on the Duke's but we can't see any likeness. The park used to be walled in, with gates, but this statue was so big part of the wall had to be demolished to get it in. For some reason the nation felt compelled to raise colossal statues to Wellington; 24 years after this one a huge equestrian statue of him was erected on top of the nearby Wellington Arch.

We are puzzled by the unusual use of "IIII" instead of "IV". Royal Parks says that the statue was ordered by George III, who died in 1820 so it was erected in George IV's reign. Could it be that when the old king died the stone had already been carved so they converted the name by adding a "I" rather than re-carve the whole stone? Lazy cheapskates!

The chain-linked pillars discouraging tourists from climbing on the plinths have not always been arranged as they are now. Holes left by some previous configuration are clearly visible on the ground. Looks like there was a double barrier with some close railings at the outer edge and some chunkier but wider-spaced fence slightly further in.

This section lists the subjects commemorated on the memorial on this page:
Achilles statue

Soldiers that fought with Wellington

This section lists the subjects who helped to create/erect the memorial on this page:
Achilles statue

Countrywomen of the soldiers that fought with Wellington

This patriotic committee of women, led by Lady Lavinia Spencer, ordered the A...