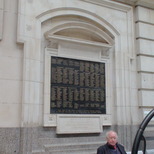 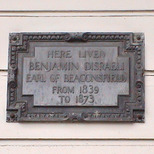 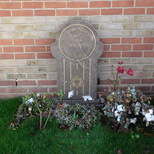 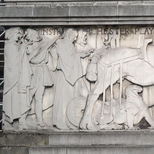 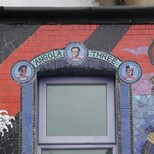 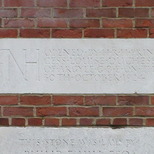 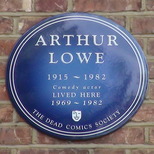 This site now (2011) has over 3,000 plaques. Alan says "My boundaries are roughly within the M25, although the occasional person such as Sir Stanley Spencer in Cookham creeps in."  He's still collecting but how many more can there be?

English Heritage now erect and look after all the "Blue Plaques" and many others in London.  The first such plaque scheme was founded in 1866 by the (Royal) Society of Arts.  In London it has successively been run by the London County Council, the Greater London Council, and since 1986, English Heritage.  There are many plaques for which EH takes no responsibility. Also be warned: not all plaques that are blue are "Blue Plaques" - we would be surprised if EH take any responsibility for Tom Baker's plaque in Berwick Street.

2016:  Time Out published a map showing the blue plaques by borough.

Plaques - The Heritage Foundation encompasses Comic Heritage, Musical Heritage, Sports Heritage and Films & TV Heritage. It has placed many plaques and these are listed on their site.

Plaques - Westminster has its own (green) plaques and this site tells you all about them.

Plaques - Pictures and information on the plaques in Soho.

Some history and interesting pictures.

A plaque-placing organisation based in Ulster. We give them a link here not just because it's a nice site and they have honoured us with a link, but also because they provide a list of other plaque-related organisations in Britain, some being in London.

As a rule we don't collect benches but here's a site that specialises in them. There are some touching stories behind some of them. We are delighted to see Ben Weinreb's bench there.