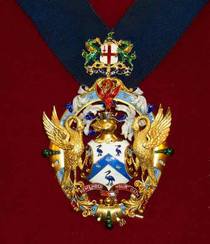 From The Poulters Charter: In 1727 John Newman left his property in Budge Row to the Poulters Company who, we believe, always used it to generate income rather than for their own purposes.

The Poulters' website does not refer to Budge Row but says: “The Company does not have a hall of its own. During the seventeenth century it rented two halls. The first was in Fenchurch Street and was vacated in 1630 when the Company leased a larger building {the second hall} in Butcher Hall Lane {now King Edward Street} from Christ’s Hospital.

This Hall was destroyed in the Great Fire of 1666 and was never rebuilt. A blue plaque in St Martin's le Grand marks the site of the second hall. {This must be a slip of the map, since the plaque is actually in King Edward Street.} From the end of the second world war the Company has held its Court meetings and luncheons in the Armourers’ Hall in Coleman St.”

Horwoods Map shows that Budge Row ran east-west joining what is now the east end of Watling Street to the junction of Cannon Street and Walbrook.

This section lists the memorials where the subject on this page is commemorated:
Worshipful Company of Poulters

A property in Budge Row was left to the Poulters in 1727. Pity the flanking ...

Master of the Innholders' Company in 1950.

In 1484 the Pewterers Company acquired a site in Lime Street (which they stil...

Waymarking says this "It was the home of the Fellowship Porters who, towards ...