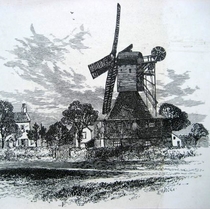 A Grade II* listed building. It was built by a carpenter, Charles March, and is a rare example of a 'hollow-post' mill. It continued in use until 1864, when the miller was evicted by the Lord of the Manor, the 5th Earl Spencer, who wanted to enclose the common for his own use. It was converted into living accommodation and was restored several times before being turned into a museum in 1975. Our picture shows the mill in 1825.

This section lists the memorials where the subject on this page is commemorated:
Wimbledon Common windmill

Nonconformists burial ground.  Enclosed with a brick wall by the City of Lond...

"The objects of The Kensington Society are to preserve and improve the amenit...