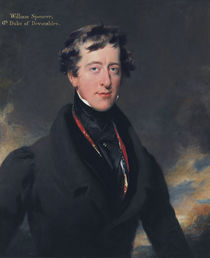 The "Bachelor Duke" after whom the Cavendish banana was named.

Born Paris, son of the 5th Duke, who died in 1811. Had a strong interest in gardening and agriculture and gave his estates a lot of attention. At his Chatsworth estate had Joseph Paxton move a whole village, Edensor, so that it did not spoil the view of his mansion house.

Failed to marry the woman of his choice and died unmarried. The title passed to his cousin William.

This section lists the memorials where the subject on this page is commemorated:
William George Spencer Cavendish, 6th Duke of Devonshire

The inscription is distressed to the extent that it is partially illegible. W...

Built as an exhibition hall for the Royal Horticultural Society, initially ca...

One of the Commissioners for the Great Exhibition, 1851.Agriculturist. Born ...