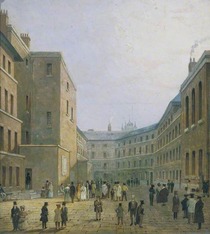 This was on the southern most section of Whitecross Street, immediately north of St Giles Cripplegate, considerably further south than the plaque location. Designed by William Montague and built in 1813 to take the debtors who had previously been mixed with the criminal population in Newgate Prison. Whitecross was built to hold 500 prisoners. The Debtors' Act of 1869 stopped people being imprisoned for debt so by 1870 all the prisoners were transferred to the new Holloway Prison and the Whitecross Prison was closed. In 1876 the Midland Railway built a goods yard on the site.  Destroyed in WW2 and redeveloped as part of the Barbican.

This section lists the memorials where the subject on this page is commemorated:
Whitecross Debtors' Prison

Mayor of Hammersmith 1946 - 49. Our colleague Andrew Behan has researched th...