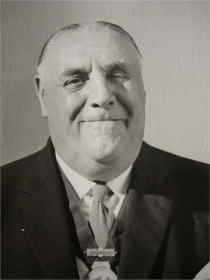 Alderman in the Borough of Hammersmith in 1948.

Our colleague Andrew Behan has researched this man (and found the wonderful photo) : Edward Ernest Woods was born on 13 February 1896 in Chelsea, the elder son of Ernest Meriton Woods and Florence Emma Woods, née Coughlin who had a total of five children. His father was a Cheesemonger's assistant. He was baptised at St Mary's Church, Bryanston Square, Marylebone on 2 May 1897 and the family were living at this time at 65 Arthur Street, Chelsea. The 1901 census shows the family living at 206 Uxbridge Road, Shepherds Bush, W12 and they were still there at the time of the 1911 census. His father was a Provisions Dealer and Edward was a 15 year old Errand Boy in a Provision Shop.

In addition to serving as a Justice of the Peace, in the 1957 New Years Honours List he was awarded an O.B.E. His name was used when the London Borough of Hammersmith and Fulham built the Edward Woods Estate between 1966-1971. It consisted of three, 23 storey, blocks of flats and a surrounding community hub, providing a total of 814 homes. He died in Hammersmith, aged 75 years, on 4 December 1971 and was cremated at Mortlake Crematorium. He is commemorated on the family headstone in Margravine Cemetery, Margravine Gardens, Hammersmith, W6.

This section lists the memorials created by the subject on this page:
E. E. Woods

Also called the College of Civilians, this was a society of lawyers practisin...