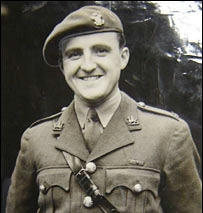 Soldier and judge. Born at 9 Station Terrace, Nelson, Glamorgan. In Normandy, he led an assault on a German machine-gun post. After all the other officers were killed in the approach, he continued to lead a bayonet charge against fifty armed enemy infantry and then single-handedly took out a machine-gun post. For this action he was awarded the Victoria Cross. After the war he studied law and was called to the bar in 1948. He became a Queen's Counsel in 1965, and in 1966 served as Counsel to the Tribunal on the inquiry into the Aberfan disaster. Died at the University Hospital of Wales, Cardiff.

This section lists the memorials where the subject on this page is commemorated:
Sir Tasker Watkins